The great and growing collection of outside work that Drucker’s thinking has generated testifies to the seminal place of his ideas on the role of knowledge in companies. These articles from the McKinsey Quarterly archive look at how companies might maximize the benefits from their in-house knowledge.
– Best practice and beyond: Knowledge strategies (premium)
– Managing the knowledge manager
– Do you know who your experts are?
– Making a market in knowledge
– The 21st-century organization (premium)
I particularly liked this diagram in “Managing the knowledge manager”:

Check out the collection here >>
Did I mention I hate McKinsey’s “premium” content policy? Those McK-partners are just penny-pinching millionaires. The Mercer people get it: their content is open. Open-up, McKinsey!

I received an email from Laurence
Haughton, the author, on Peter Drucker.

With his permission, here it is:

It is now five days since Peter Drucker passed away and the tributes have
filled the air like so many streamers and confetti at a ticker tape parade.

According to columnists in journals and blogs Drucker was, “an American
sage,” “the uber-guru,” “profound,” and “a visionary.”

America’s two most popular business pundits agree. “[Drucker was]
the right man for our times,” wrote one. And the other was just as reverential,
“The most influential management thinker in the second half of the twentieth
century.”

But I don’t see it that way.

If Drucker was “the most influential” shouldn’t he have changed
a lot of executive behavior? If he truly was “profound” or the “right
man for our times” wouldn’t he have a lot of followers who practice
what he prescribed?

Peter Drucker is, as he himself once wrote about management sciences pioneer
Mary Parker Follett, the “most quoted and least heeded” teacher
of management.

Why he is so quoted is easy to understand. Pick up anything he wrote. I just
went back and skimmed through 1964’s “Managing for Results.”
You’ll find Drucker is incredibly insightful yet totally clear and practical.
He’s no ivory tower theorist. Drucker explains exactly what to do and
what not to do, giving systematic, logical, and consistent answers to all
the fundamental challenges of management. If you are opining about management,
he’s a perfect source to quote.

But as far as being heeded… I don’t think so. What company is managed
according to his prescriptions? What leader follows his clear, specific advice?
Frankly, is there anyone who gives him anything more than lip service?
Take just one of Drucker’s lessons. He criticized organizations who issued
directives to “cut 5 or 10 percent from budgets across the board.”
He said, “This is ineffectual at best and at worst, apt to cripple the
important, result-producing efforts that usually get less money that they
need to begin with.” Yet, when have you seen a company cut costs using
Drucker’s clear distinctions between efficiency and effectiveness instead
of the across-the-board cop out?

And I’ll bet others can find 100 additional quoted and ignored lessons
from Peter Drucker just like that one.
Years ago I was told “performance is the proof that the learning took
place.” If that’s true I’m sorry to say that despite all the
tributes, up to now, we’ve learned very little from Peter Drucker.

Here’s a dead blog from a very popular writer. Why did he even start one? 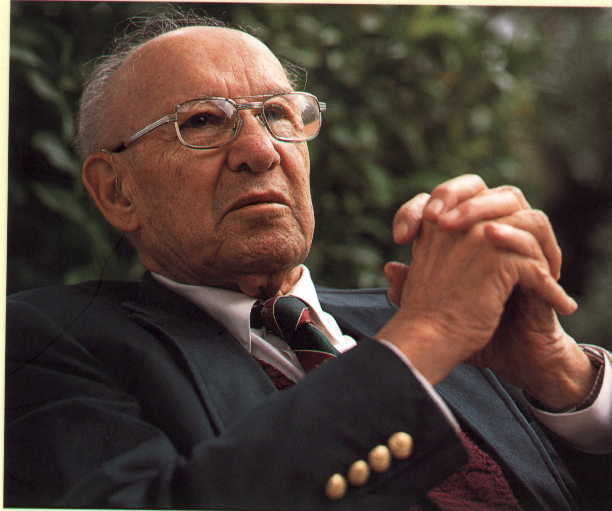 Another great leader. I remember reading Maverick back in ’94 and handing a copy to Riley Bechtel, the CEO of the company I used to work for when I started my career.
I’ve never forgotten Semler, and it’s great to see that he hasn’t changed!

One more thing: Semco’s annual rate of staff turnover is 2%!!

Doug Smith’s latest blog entry: “Thick We’s” takes a hard look at how we’ve lost track of what matters:
“We lead dual lives — pursuing value over values from 9 to 5 and the reverse during the remainder of each day.”
and
“Today, the vast majority of those organizations pursue value over values. Others — and the less powerful ones — pursue values over value. Neither of these strategies are sustainable. Churches, schools, non-profits and so forth cannot sustain themselves by ignoring and being blind to value. But — and this is by far the more serious challenge — neither can for-profit organizations (whether Wal-Mart or GM or Roche — or a small bookstore or cleaners or barbershop) sustain itself if value — if profits, wealth, shareholder value or winning — is the trump card for every single serious issue and question on the table. Eventually, that approach eviscerates and hollows out the values — social, political, spiritual, environmental, medical, legal and others — on which the very value pursued rests.”
Want to know more? Check out Smith’s book.

The Amazon “Pages program” would “unbundle” books, by allowing customers to purchase and view the pages they want or need.
Amazon “Upgrade” will give customers the option to purchase a physical book and perpetual online access to the book. [I do like this idea- now I won’t have lug all my books around the world.]
When will this happen? Sometime next year… read about it here.
How does this compare with Google’s “Print Library”?
Here’s what the bloggers are saying:
“Suddenly the reason why publishers and authors are so pissed off at Google becomes a little bit clearer. They think that they’re going to be able to slice and dice their books, selling little pieces of the book as people want them. They’re taking a page from the entertainment industry — and, like that industry, they’re going to discover this plan won’t work very well. They’ve just added friction in the form of additional transaction costs, both mental and monetary to finding information.”
—Techdirt
“Ultimately, it’s a very Long Tail idea, isn’t it? Allow people to buy stuff the way they want to, so that you can wring every last cent out of your content, by earning $1 from someone who isn’t willing to spend $10 for the entire book.”
—Yellow Handman
“It’s figured out a way to please authors and publishers, spread around the money for everyone, and do the right thing for readers. Google should sit up and take notice.”
—Konnecke.com
“It sounds intriguing – especially to folks who conduct research or who cite information. For example, I might want to cite a book in a blog post or an article or something, but not wait for the entire book (or even buy it). But to pay a nominal amount for access to a few pages – well, that might well be worth the cost.”
—Walloworld

I’m kidding, but hey- now you can read Jane Austen and click on Google Ads at the same time!
Here’s the official line: “One of our goals for Google Print is to change that, and today we’ve taken an exciting step toward meeting it: making available a number of public domain books that were never subject to copyright or whose copyright has expired. We can show every page because these books are in the public domain.” more>>
I like it. They thought of it before Bill Gates.
Is this the “democratization of knowledge” Larry Prusak talks about?