Back in November I blogged about one of my early heroes when I first got interested in business- Ricardo Semler. Now I’m happy to see a wonderful article about Semler and his management style in Strategy+Business (S+B).

Grupo Semco, as I mentioned earlier today, is the company that’s had 14 straight years of double-digit growth.

Semler has literally turned our current understanding of management on its head. He has taken the philosophies of Deming (“management is the problem”) and Drucker (“dedicated employees are the key to success of any corporation”) seriously and implemented them in a way that no one dreamed possible.

Drucker’s main thesis, as the Motley Fool opines, was “that workers were no longer interchangeable units of production. Instead, they needed to have some level of independence, which Drucker deemed critical for a company’s growth. He saw employees as “knowledge workers.” Take that to the extreme, and you get Semco.

Here’s what Charles Handy has to say:
“I just wish that more people believed him,” laments Charles Handy, the British management guru and social philosopher. “Admiring though many are, few have tried to copy him. The way he works — letting his employees choose what they do, where and when they do it, and even how they get paid — is too upside-down for most managers. But it certainly seems to work for Ricardo.”

Also from the S+B article:

“Semco’s 3,000 employees set their own work hours and pay levels. Subordinates hire and review their supervisors. Hammocks are scattered about the grounds for afternoon naps, and employees are encouraged to spend Monday morning at the beach if they spent Saturday afternoon at the office. There are no organization charts, no five-year plans, no corporate values statement, no dress code, and no written rules or policy statements beyond a brief “Survival Manual,” in comic-book form, that introduces new hires to Semco’s unusual ways. The employees elect the corporate leadership and initiate most of Semco’s moves into new businesses and out of old ones. Of the 3,000 votes at the company, Ricardo Semler has just one.
“In Mr. Semler’s mind, such self-governance is not some softhearted form of altruism, but rather the best way to build an organization that is flexible and resilient enough to flourish in turbulent times. He argues that this model enabled Semco to survive not only his own near-death experience, but also the gyrations of Brazil’s tortured politics and twisted economy. During his 23-year tenure, the country’s leadership has swung from right-wing dictators to the current left-wing populists, and its economy has spun from rapid growth to deep recession. Brazilian banks have failed and countless companies have collapsed, but Semco lives on.”

I remember an article by Rajat Gupta years ago in which he wrote about the irony of businesses in democratic countries. They were all run as totalitarian regimes! At the time, I thought- surely there must be companies that run on the principles of democracy (tells you how naive I was). Now Ricardo Semler changes the world of business forever.

I tell you, this is not a flash in the pan. Semler has uncovered the secret to sustainable business, and if you read Maverick : The Success Story Behind the World’s Most Unusual Workplace

or The Seven-Day Weekend: Changing the Way Work Works

you’ll agree that something more spectacular than futbol has emerged from Brasil, er, Brazil.

Keep your eyes open- eg. Semco does not, repeat not, have an HR department. Note also Semler’s non-profit work and his eco-resort idea. 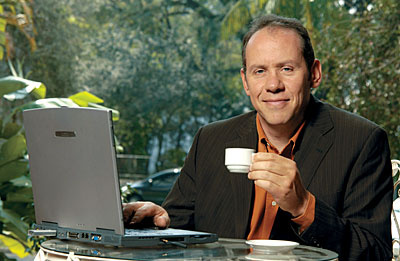 – the Wikipedia entry on Ricardo Semler and Workplace Democracy

1. Be a serious and trusted company
2. Value honesty and transparency over momentary interests
3. Search for the balance between long term and short term profit
4. Offer fair prices for our products and services and be the best in the market
5. Provide diversified services to clients, putting our responsibilities before profit
6. Stimulate creativity, prizing people who take risks
7. Incentivize participation, and question decisions imposed from the top down
8. Preserve an informal environment with professionalism and without preconception
9. Maintain safe working conditions and control the industrial process to protect the environment
10. Be humble and recognize mistakes, knowing that there is always room for improvement

– Chapter one from Semler’s book- The Seven-Day Weekend

– ‘Idleness is good’ in the Guardian

– Lessons from Semco on Structure, Growth and Change by Wally Bock

– transcript of a CNN interview with Semler

– a somewhat dusty case study from Thunderbird on Semco

Fun quote:
“Semco has no official structure. It has no organizational chart. There’s no business plan or company strategy, no two-year or five-year plan, no goal or mission statement, no long-term budget. The company often does not have a fixed CEO. There are no vice presidents or chief officers for information technology or operations. There are no standards or practices. There’s no human resources department. There are no career plans, no job descriptions or employee contracts. No one approves reports or expense accounts. Supervision or monitoring of workers is rare indeed… Most important, success is not measured only in profit and growth.” – Ricardo Semler

8 Replies to “Ricardo Semler’s Grupo Semco: The Democratization of Work”