Jack and Suzy Welch star in a Microsoft-sponsored, web-based, business reality show. The site is here, but it’s too cluttered (I think they were trying to be cool).
I do think this is a great advertising campaign, if the branding fools don’t destroy it (by placing too many Microsoft (yawn) pitches in the margins, for example).
Watch the first show below. Jack jumps in and “surfaces” a few issues at Connect by Hertz – a new car-sharing venture. In a way, the fact that Jack pulls these issues out in 5 minutes sorta tells us how out of it Hertz is.
Part 1:

After watching this I get the feeling they don’t understand VG’s Box1-2-3 strategy for innovation. In fact, they are most likely going to fail. After 30 days, the CEO has still NOT created a global business unit for Griff. Not good. No follow through on commitments.
One more thing. Why doesn’t Microsoft bring Jack and Suzy into Microsoft for a few days? They could wake the sleepyheads real fast. Stop one: The Automotive group!
Also, I’d like to see Obama send Jack and Suzy into GM for six weeks. That would sure be a reality show worth watching.
BTW: A quick ecosystem analysis shows that Zipcar is beating them hands down. Rankings: almost 600,000 for Connect by Hertz and 22,000 by Zipcar.

John Hagel on CNBC [the video embed code is faulty and doesn’t work] >>
Watch the short CNBC video, and come back to read the full report here >>

What’s the business value of democracy?
Finally, the real value of Twitter revealed>>

“We’ve been struck by the amount of video and eyewitness testimony,” said Jon Williams, the BBC world news editor. “The days when regimes can control the flow of information are over.”

Hope takes to the street:

Get the big picture >>

This is very moving – the faint twitter of Democracy in Iran.
The question: is this going to be another Tiananmen Square? Or is there hope for a middle-eastern Wenceslas Square?
Ahmadinejad, you have lost the election and your soul.

Nicholas Kristof‘s article on the difference between health care in the US and health care in Canada is a must read for everyone.
And it’s good to know that the AMA is a crooked organization as well. What did you expect? Medicine is a for-profit business. Anything else is socialism… right?

And darkness covered his eyes.
Madness = an 88-year-old white supremacist.
Who is to blame? The NRA? The schools? Parents? Republican extremism? FOX News? The Neo-Nazis? Operation Rescue?
Hate closes down the world.. And hate speech begets hate-filled actions.

The extremists seem to have taken over Israel’s soul.
Watch >>
Tragic blindness.
Max Blumenthal says about his video:
I hope those who have watched it, especially those predisposed to dismiss it as anti-Israel propaganda or shock video with “no news value,” will at least ask how vitriolic levels of racism are able to flow through the streets of Jerusalem like sewage, why the grandsons of Holocaust survivors feel compelled to offer the Shoah as justification to behave like fascist street thugs, and how the sons and daughters of successful Jewish American families casually merged Zionist cant with crude white supremacism. The willful avoidance of these painful questions by self-proclaimed supporters of Israel is setting the stage for the complete delegitimization of the country they claim to love. As Obama said, “any world order that elevates one nation or group of people over another will inevitably fail. So whatever we think of the past, we must not be prisoners of it.”
And on top of this we have morons like Rupert Murdoch.
On the other side, we have the moving story of Josh Lipsky and his trip to Buchenwald.
I see how easy it is to use hate to unite people – the Christian fundamentalists, white supremacists, Jewish settlers, Zionists, Hamas, Taliban, Al-Qaeda – flip sides of the currency of terror.
The world is not against you, Israel. You are against you.
Hat-tips to Dera and Steven for sending me these stories.

Funny how Palin has to steal content from Gingrich. If she was doing this in college, she’d be expelled…
Maybe stealing is at the core of the GOP brand DNA?
See here, here, and here.

Congratulations, Microsoft.
Bing is better than Google. There, I said it.
Type in “Godot” and see what I mean.
Wolfram Alpha, on the other hand, is a disaster. The less said, the better.
I can’t give up on Google, so for now, my new search engine is GooBing! 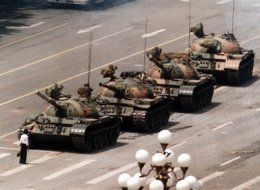 Never, never, never, never. Never will we forget this anonymous hero.
When China does get democracy one day, they will build a statue for him at the very spot in Tiananmen Square.

The acquisition of Wind River by Intel should not come as a surprise for anyone who has been paying attention to the rapid evolution of the online experience. We know for example that the future of electronics is collaboration, sharing, and access – anytime, anywhere, on any device..
Companies that build a vision around the future and then work to make that future a reality using their business ecosystems will win the next round of competition after we emerge from the recession. Intel’s shaping strategy, as my friend John Hagel would call it, is nothing short of brilliant.
Let’s see why.
In the automobile “infotainment” world, Intel has been quietly working with Wind River and BMW (and others) to build a shared platform for devices based on open source standards. The ecosystem partners comprise the Genivi Alliance and are in competition with another, smaller ecosystem of partners driven by Microsoft. The difference is that Microsoft’s infotainment stack is not open. Ford’s Sync and Fiat’s Blue & Me products are based on this competing platform. (How long before they switch?)
The ultimate irony – both platforms are built on Intel. And in this case, Intel knows something that Microsoft doesn’t – that open systems are the future.
The Wind River platform is not limited to automobiles. They’re doing the same across a variety of marketspaces, like the Open Handset Alliance Android – another open source platform.
The Wind River acquisition also helps include “Intel Inside” on all the devices which cloud computing will bring. Intel is making sure that the Telcos, IT hosting providers, hardware and software vendors – everyone gets to use Intel as the foundation of their future business.
Shaping Strategy 101: Intel gets it.

“When the US Department of Defense is the target of no fewer than 128 information infrastructure attacks per minute from China, and we discover that while DoD is almost universally using off-the-shelf Microsoft Windows systems while China is engaged in working toward 100% military deployment of security hardened FreeBSD, it becomes clear that there’s definitely something wrong with US information security policy.”
Whoa!

Business stupidity is always a sign of something else more worrisome. Several Burger King franchises in Tennessee have been displaying “Global Warming is Baloney” signs outside their restaurants.
Now that they’ve decided to speak their minds, how about we speak ours with signs like these:
– “Try our Massive-Coronary-Failure Burger – Buy 1 get 2 Free”
– “No Mad Cows Allowed on Premises”
– “Our Burgers are E-Coli free, or Your Money Back”
– “Our Rats are Sanitized for Your Protection”
– “Our Employees Wash Their Hands after Using the Restroom”
See what I’m getting at?
The franchises are all owned by a company called the Mirabile Investment Corporation (MIC) that owns more than 40 Burger Kings across Tennessee, Arkansas and Mississippi.
Nice going, guys. What next? A “whites-only” sign?
Burger King should yank their licenses. I’m sure they can get some other, more responsible, business owners to take over.