The video is here >>

If Obama loses, the USA is finished. That’s how important this moment is:

Tom Tomorrow’s at it again: 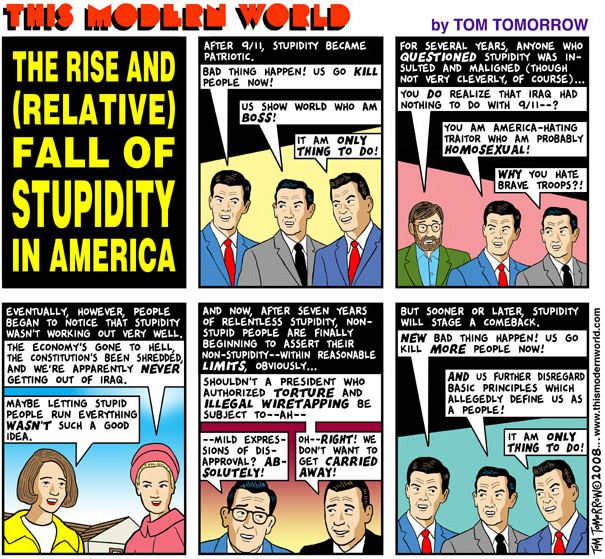 If only this was funny…

John Hagel writes about Nick Carr’s talent for “stirring debate”:
the Internet is subtly molding our minds to favor brief snippets of information rather than the nuance and complexity that can only be communicated in much longer forms such as books.
Hagel’s point is:
“…snippets of information alone are deeply dangerous. They distract us with never-ending waves of surface events, spreading us ever thinner and obscuring the deeper structures and dynamics that ultimately are shaping these surface events. Those of us who stay only on the surface, swimming in a sea of snippets, will ultimately lose sight of land.
We need books, or whatever the digital long forms of content are that will replace the book, to help us penetrate the surface and explore the deeper structures and dynamics that make sense of the changes around us.”
I wanted tell Carr that it was TV that made us stupid before Google, but that we keep discovering new ways to demonstrate it. Every generation proves its stupidity in new and wondrous ways.
Now if we could just get the Republican presidential candidate to start reading a book or two, we might be onto something.

I love stumbling upon old Peter Drucker interviews. The insights he throws out with just about every breath are astonishing.
Here he is on knowledge productivity:
“There has been no increase in the productivity of knowledge work. I began to teach on my twentieth birthday. November 19, 1929, I gave my first university lecture. There has been no improvement in the productivity of college faculty since. If anything, it has gone down, because of committee meetings.
My distinguished colleagues spend God only knows how much time in committee meetings, and there has never been a committee meeting that produced any results. President Roosevelt said, If I want to make absolutely sure that nothing gets done, I appoint a committee.”
Good to know that committees still rule the world of both corporate and government decision-making.

View image
Who would you rather have as your boss? As the leader of your country?

Are you ready for this?
What are we? China??

So why did Putin send the Russian army into Georgia?
Apparently this incursion has been some time in the planning. And despite the political reasons, I still feel there’s an oil game going on.
Putin’s rewrite of reality is something he’s adopted by watching the US administration’s actions in Iraq. If the US can invade a country like Iraq on false pretenses, why can’t we?
And again, there’s an oil connection as well.

Andrew J. Bacevich — Professor of International Relations at Boston University, retired Army colonel, and West Point graduate — joins Bill Moyers on the JOURNAL to encourage viewers to take a step back and connect the dots between U.S. foreign policy, consumerism, politics, and militarism.
Wake up, everybody.

Here’s what the Emperor of Ice-Cream – Ben Cohen – has to say:

And here’s an online game for you to play – allocate your very own federal budget!!
See also: sensiblepriorities.org >> 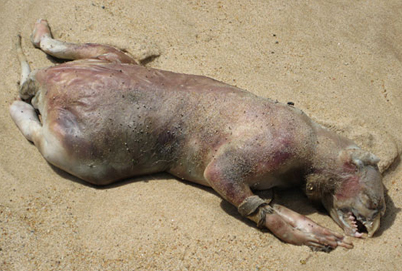 Pick your explanation:
1. action photo of McCain vacationing on a nude lobbyists-only beach
2. pictorial representation of the Exxon CEO after the Lord smites him with a bolt of lightning
3. what happens when global warming attacks a sleeping Dick Cheney sans his top-secret-formula sunblock
4. FOX News’ ideal news story (far better than covering serious issues)
5. a plucked raccoon
What fun, this marketing of myths…

This administration is evil. They destroy life on earth every chance they get. All for a few bucks…
That’s what you get with the GOP: rubber stamps (er, dodos) for industry.
Scientists can now go suck eggs.
Heckuva job, Bush! Here’s your contribution to world history:
Arctic
Greenland ice sheet will virtually completely disappear, raising sea levels by over 30 feet, submerging coastal cities, entire island nations and vast areas of low-lying countries like Bangladesh
Latin America
The Amazon rainforest will become dry savannah as rising temperatures and falling water levels kill the trees, stoke forest fires and kill off wildlife
North America
California and the grain-producing Midwest will dry out as snows in the Rockies decrease, depriving these areas of summer water
Australia
The Great Barrier Reef will die. Species loss will occur by 2020 as corals fail to adapt to warmer waters. On land, drought will reduce harvests
Europe
Winter sports suffer as less snow falls in the Alps and other mountains; up to three-fifths of wildlife dies out. Drought in Mediterranean area hits tourism
Africa
Harvests could be cut by up to half in some countries by 2020, greatly increasing the threat of famine. Between 75 million and 250 million people are expected to be short of water within the next 30 years
Final note: so what’s a scientists to do these days? They can work on building invisible clothes for Bush and Exxon-Mobil executives.
And now, a word from our sponsors:
Global warming is brought to you by the Bush administration and is generously underwritten by Exxon-Mobil.

Your mind is active when you sleep. Mine, I’m not so sure…
Seriously though:
1. State your problem
2. Go to sleep
3. Problem solved!

The opening ceremonies were spectacular. I’ll give them that.
But they were quite Orwellian as well…
Propaganda as theater. Theater as in the world stage.

Naomi Klein explains:
“The goal of all this central planning and spying is not to celebrate the glories of Communism, regardless of what China’s governing party calls itself. It is to create the ultimate consumer cocoon for Visa cards, Adidas sneakers, China Mobile cell phones, McDonald’s happy meals, Tsingtao beer, and UPS delivery — to name just a few of the official Olympic sponsors. But the hottest new market of all is the surveillance itself. Unlike the police states of Eastern Europe and the Soviet Union, China has built a Police State 2.0, an entirely for-profit affair that is the latest frontier for the global Disaster Capitalism Complex.”
What a disaster! Bring on the smog and mirrors.
P.S. – more on MacHistory here>>

As a kid in India, the phrase “brain drain” meant someone smart just left India to work in the US.
Now it looks like the tables have turned:
“…more than 1 million highly skilled professionals such as engineers, scientists, doctors, researchers, and their families are in line for a yearly allotment of only around 120,000 permanent-resident visas for employment-based principals and their families in the three main employment visa categories (EB-1, EB-2, and EB-3). These individuals entered the country legally to study or to work. They contributed to U.S. economic growth and global competitiveness. Now we’ve set the stage for them to return to countries such as India and China, where the economies are booming and their skills are in great demand. U.S. businesses large and small stand to lose critical talent, and workers who have gained valuable experience and knowledge of American industry may become potential competitors.”
Ouch.
Skilled immigrants create jobs:
“…more than half of the engineering and technology companies started in Silicon Valley and a quarter of those started nationwide from 1995 to 2006 had immigrant founders. These companies employed 450,000 workers and generated $52 billion in revenue in 2006.”
We need a new policy on skilled immigration, Obama.
More info: an editorial by Alan Webber on the same topic>>

JH3 and JSB have written an insightful piece for BusinessWeek titled: How SAP Seeds Innovation: SAP’s collaborative Web sites and discussion forums give its customers ways to learn from SAP business partners as well as from each other.
So why does SAP succeed where others fail?
According to Hagel:
1) SAP generated its ecosystem, which consists of customers, business partners, experts and independent parties by addressing the needs of the participants

and
2) it focused on the needs of individuals, not just companies.
There you have it: people first.
Read the entire article >>

Time to stop the greenwashing, and get to work.

The Republicans continue their desperate smear campaign tactics against Obama. And once again they shoot themselves in the foot.
In TIME:

How out of touch is Barack Obama? He’s so out of touch that he suggested that if all Americans inflated their tires properly and took their cars for regular tune-ups, they could save as much oil as new offshore drilling would produce. Gleeful Republicans have made this their daily talking point; Rush Limbaugh is having a field day; and the Republican National Committee is sending tire gauges labeled “Barack Obama’s Energy Plan” to Washington reporters.
Too bad Obama’s point actually illustrates the total ineffectiveness of the Republican “Drill now, think later” mindset (underwritten by Exxon and friends)…

McCain’s “straight-talk” express gets derailed again and again.
For my part I am now permanently mad at the Republicans for their crimes against the earth.

not pretty…
More here and here>>