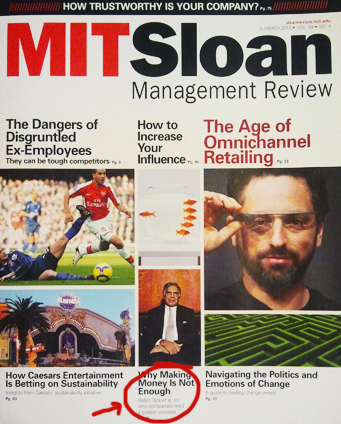 This is going to be a central theme in business going forward: what is our purpose?

“…until Drucker came along most everyone believed the basic “fact” that the purpose of a business was to make money. That is, to make a profit. This belief leads to a corollary, another myth, believed by all–that is, that the goal of any business is profit maximization. In other words, whatever your business, your goal should be to make as much profit as possible. If you accept making a profit as a business’s purpose, the second part just follows naturally. This might even seem worthy to many. To quote Michael Douglas’s famous (or infamous) statement in his role as Gordon Gekko in the 1987 movieWall Street: “Greed is good.” Even today many “know” greed, or profit maximization to be the correct prescription for business success, even if it is amoral or shouldn’t be “good” from a moral perspective. Not so fast, Gordon. As Drucker so often said, whatever everyone knows is usually wrong, Hollywood films not excepted. Drucker told us first that profit is not the purpose of business and that the concept of profit maximization is not only meaningless, but dangerous.”

Now Ratan Tata and gang (myself included) have a similar message:

The problem with industrial capitalism today is not the profit motive; the problem is how the profit motive is usually framed. There is a persistent myth in the contemporary business world that the ultimate purpose of a business is to maximize profit for the company’s investors. However, the maximization of profit is not a purpose; instead, it is an outcome. We argue that the best way to maximize profits over the long term is to not make them the primary goal.

So what is to be done?

What is your company doing to create purpose beyond profits? The future of our planet depends on your answer.

Read: Why Making Money is Not Enough