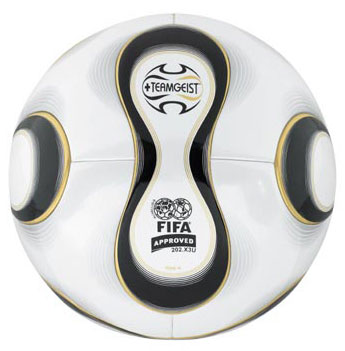 Here’s the official spin from adidas:
The +Teamgeist is the Official Matchball of the 2006 FIFA World Cup. It’s the most accurate football ever produced. No other ball reacts so flawlessly shot after dribble after pass, in the air and on the ground.
• Revolutionary panel shape eliminates surface irregularities to create a perfectly round ball for greater accuracy
• Panels are thermally bonded to create a smooth, seamless kicking surface
• Complete underglass print significantly decreases wear of colors and design
• New carcass retains shape better for improved accuracy and power
• FIFA approved with highest FIFA rating
• 100% PU leather
• Imported
Carcass??
BTW- that’s $130.00
Here’s an idea for a true global index: What’s the cost of the average [actually used by kids] soccer ball in your country? In the US it’s $19.95 for a decent kick-about ball. In Europe? China?
UPDATE:: Reaction to the new ball:
“It is the way a ball should be made,” – David Beckham, England
“The balls design is great, it is going to be a success,” – Kaka, Brazil
“I like this ball a lot because of its return to the more traditional colors,” – Alessandro Nesta, Italy
“When you kick it, it goes in the right direction,” – Zinedine Zidane, France