Fishermen in northern Thailand have netted a fish as big as a grizzly bear, a 646-pound Mekong giant catfish, the heaviest recorded since Thai officials started keeping records in 1981.
Unfortunately, the fish did not get away: 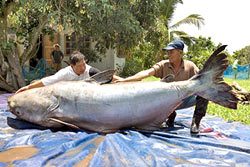 The fish was caught and eaten in a remote village in Thailand along the Mekong River, home to more species of giant fish than any other river. Local environmentalists and government officials negotiated to release the record-breaking animal so it could continue its spawning migration in the far north of Thailand, near the borders of Thailand, Laos, Myanmar and China – also known as the “Golden Triangle.” But the fish, an adult male, later died. The species is declining, which fishermen in the region blame on upstream dams and environmental deterioration. And that’s the real story.
More from the WWF here.