One of the reasons why Houston will never get a shot at hosting the Olympics (not that we want it, at this point) is because we don’t have a world-class transportation system. So while Houston is the fourth-largest metropolitan area in the US, we’re not even close when it comes to public transportation (can you believe we’re behind Dallas?). According to the 2010 U.S. Census, we have a population of over 2.1 million people and a land area of 599.6 square miles (and that’s not counting the suburbs).

Houston is second only to New York when it comes to resident Fortune 500 companies.

So what’s the problem? Why doesn’t Houston have a world class transit system at this point in its history? And what can be done?

The traditional finger-pointing is political. Suburban taxpayers who supported referendums in 2003 and 2012 have demonstrated a desire for development, only to have officials shortchange them.  The latest in line is John Culberson, but to be fair, past opposition has come from both sides of the political aisle.

And who is behind these politicians?  You don’t have to look very far to see that Houston is an energy town – in fact it’s the “energy capital” of the world.  Our energy companies are not interested in a world class transit system;  for them, seems like widening the freeways is the only solution. This lack of civic leadership reflects poorly on our city and is going to be a burden going forward. Those Fortune 500 companies that call Houston home will find a better place to live.

To be clear: between the lack of leadership from business and the misleadership of our elected officials, Houston has a third rate transit system, used by less than 3% of the population.

There is no long-term plan in place. That, in itself, speaks to the magnitude of the problem.  Furthermore, any plan we do get is probably going to be a constrained plan that does nothing to address the real challenge.

What can be done?

How can we bring our politicians and business leaders together? Or is Houston doomed to remain a third-class city when it comes to mass transit?

The reason I wrote this blog post was to highlight a third way. Let’s look at an example from a country and place where things are a lot harder than Houston. Delhi – the capital of India – is a city with 9.9 million, with horrible infrastructure problems.   Over the years, like Houston, no real attempt was made to build an infrastructure equal to the needs of the citizens. 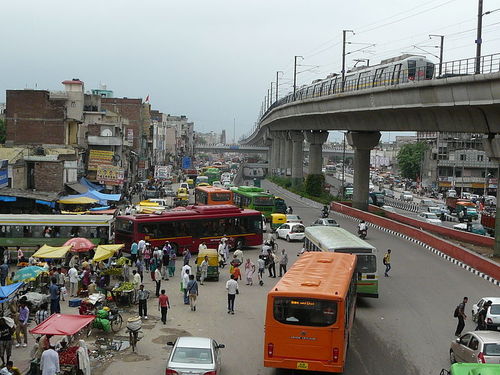 Then, in October 1998, ground was broken on a comprehensive metro system that had been talked about for over three decades. Today, the Delhi Metro is the world’s thirteenth largest metro system
in terms of length. The network consists of six lines with a total length of 189.63 kilometres
(117.83 mi) with 142 stations, of which 35 are underground, five are at-grade,
and the rest are elevated. All stations have escalators, elevators, and tactile
tiles to guide the visually impaired from station entrances to trains. It has a
combination of elevated, at-grade, and underground lines, and uses both broad
gauge and standard gauge rolling stock.

What can Houston learn from Delhi?  At least three things:

1) build a METRO system worth having: don’t build a system that just clogs up already busy lanes to shuttle folks from one business hub to another.  Focus on the real issue: mass transit, specially the mass part.  We should aim for getting around 20-30% of our citizens on the METRO during rush hour, and that will only happen if we focus on real solutions.

2) use the right-of-way on existing freeways: the genius of the Delhi rail line is that it is elevated and runs along the main highways already in place. In Houston, this would mean our HOV lanes would be turned into METRO lines – elevated, above the traffic. Even the stations are elevated; which sounds weird, but actually it works very well. The image below is a METROstop along the line – well above the freeway: 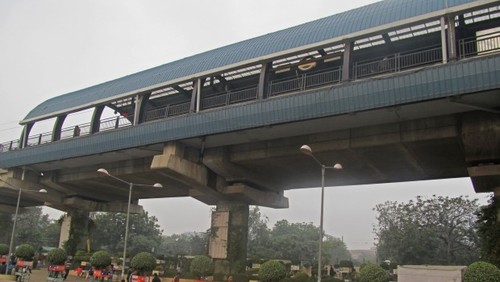 3) mass transit is too important to be left to METRO alone: in Delhi, and you have to appreciate the extent of corruption in public office to understand this, a special purpose organization was formed called the DMRC.  This cross-agency team was vested with great autonomy and powers to execute the gigantic project. In Calcutta where they did not have such a cross-agency team, the Kolkata
Metro was badly delayed and 12 times over budget due to “political
meddling, technical problems and bureaucratic delays.” The first
phase of the Delhi Metro project was completed in 2006, on budget and almost three years
ahead of schedule, an achievement described by Business Week as “nothing
short of a miracle”.

So can miracles happen in Houston?  They can, if only our politicians and METRO folks would actually share some values – like putting aside their petty interests for the good of the city. I’m not holding my breath.  Hey, maybe we can build some more public funded sports arenas; those projects seem to have no problem getting funded!