Elvis Presley and Bob Marley as they would look today (h/t these folks): 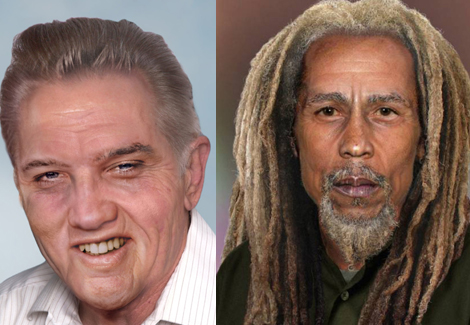 What can we learn from these lads? These, the young lions, who conquered the world like Alexander, but then had it all taken from them by Thanatos.

One thing you have they don’t. And if you escape the sword of Thanatos for a while, you still have to deal daily with his post-modern cousins: Boredom and Anxiety.

He realized now that to be afraid of this death he was staring at with animal terror meant to be afraid of life. Fear of dying justified a limitless attachment to what is alive in man. And all those who had not made the gestures necessary to live their lives, all those who feared and exalted impotence– they were afraid of death because of the sanction it gave to a life in which they had not been involved. They had not lived enough, never having lived at all.

The man also said, “to have time was at once the most magnificent and the most dangerous of experiments.”