The global-warming deniers are quiet as the world’s forests burn.

Across Russia, the political drama adds to the horror as this, the hottest summer on record, takes its toll on the poorest Russians as they lose property, homes, and even lives: 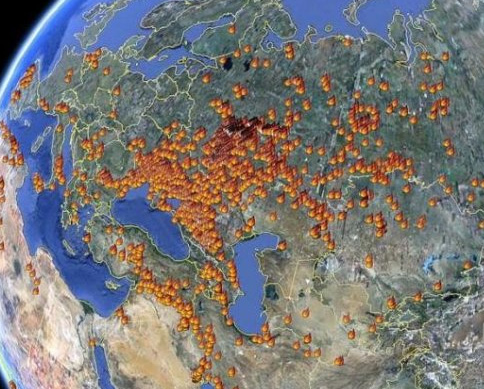 For those of you who are ready to say this is “God’s punishment,” I can tell you we’re probably going to be next. Maybe not this summer, because we’re getting far more rain in the West than usual, but perhaps the next.  The reason I can say this with near certainty is that our forests are already dead or dying. So my guess is that all these dead trees are going to burn across North America pretty soon.  The map looks like this (it’s an overlay of the extent of the pine-beetle plague):

None of this is normal.

Our politicians do nothing. Our Republican Senators have been owned by Big-Oil and Big-Coal forever.  And the poor Christians haven’t yet figured out that they’re being taken for a ride.  For them, I say – check your Revelations 11:18 – at some point you have to say “enough!” Why do you support these people who are destroying God’s Creation?

Sen. Jim Inhofe, this is on your head. Your grandchildren won’t forgive you, even if they think you’re just swell right now. This is not “global warming deception” as you call it in your Luntzian language of deceit. It’s g-l-o-b-a-l w-a-r-m-i-n-g, period.

Have you no shame, Senator?