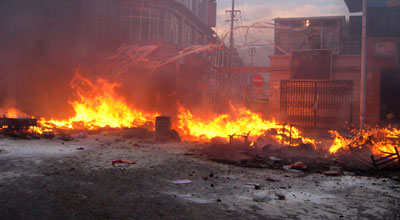 The Economist story Welcome to the Olympics states:
“Resenting criticism of its handling of unrest in Tibet, China wages a gruesome propaganda offensive…”
“Meng Jianzhu, China’s most senior police official, also toured Lhasa on March 23rd and 24th. His words were not encouraging. Monasteries, he said, should step up “patriotic education”—ie, a much resented government-led campaign that requires monks to state their rejection of the Dalai Lama, who is hugely revered in Tibet.”
Patriotic Education? Sounds a bit like our Republicans…
Nice.
Read this report as well: “Trashing the Beijing Road”