The Economist tells us that Hyundai almost yanked its Super Bowl advertising due to economic concerns. At the last minute, they decided to stay put.
Yank it, I say. And spend the money advertising on the Internet!
The article goes on to tell us that: “Marketing spending is one of the first things companies decide to cut when faced with slowing sales.”

This is true, but only when companies don’t understand marketing. Which means despite what Maurice Lévy at Publicis Groupe and Sir Martin Sorrell at WPP are saying, look for a crash in marketing spend.
The NY Times tells us “Forecasters Say Madison Avenue Will Escape a Recession, Just Barely.”
I say they’re wrong.
We know that the research tells us that recessions clearly reward aggressive advertisers and destroy timid ones.
In a study of U.S. recessions, McGraw-Hill Research analyzed 600 companies covering 16 different SIC industries from 1980 through 1985. Results showed [hat tip to MacTech] that business-to-business firms that maintained or increased their advertising expenditures during the 1981-1982 recession averaged significantly higher sales growth, both during the recession and for the following three years, than those that eliminated or decreased advertising. By 1985, sales of companies that were aggressive recession advertisers had risen 256% over those that didn’t keep up their advertising. 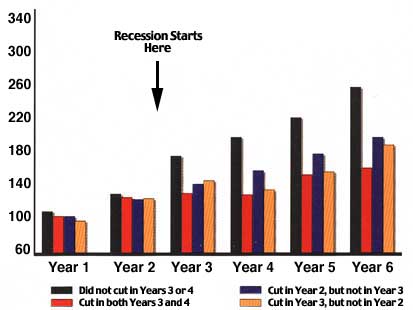 Sales for the companies studied were relatively even before the recession, but varied sharply during and after. Companies that cut advertising during both of the recessionary years maintained flat sales during the period and only modest sales growth in the following two years. In contrast, the companies that maintained their advertising experienced significant sales growth throughout the four-year period. 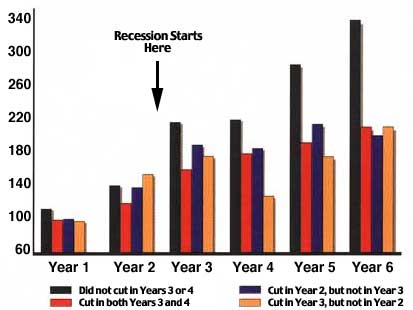 According to the study and contrary to popular belief, cuts in advertising during a recession decrease net income over the long haul. Companies that maintained advertising during the recession enjoyed measurably higher net income gains not only during the recession, but even more so, two years after the recession. This in stark contrast to those companies those companies that cut advertising both years and significantly reduced their profits during the recession, and for years following.
On top of that, my friend Sundar Bharadwaj insists that “the impact of branding on firm performance outweighs both the impact of the competitive environment and resource allocation.”
But that, ladies and gents, was before the Internets.
Now, we’re going to see something we’ve never seen before. The end of advertising as we know it. If the Olympics go south, as they just might especially given the lame coverage we’ve seen in the past, I expect that TV will be hit hardest, followed by print – magazines and periodicals.
Radio will stay flat, and the biggest (and only) gainer will be online advertising.
I’m convinced we’re going to see a boom in marketspace analytics.
Smart money will focus on ecosystems. They’ll know exactly where to advertise to get the best response to drive quarterly results.
Ask yourself:
– Are we in the right ecosystem to begin with?
– Who are we competing against really? (versus who we believe we are competing against)
– Where do we stand vis-à-vis our competitors?
– Who else is in our ecosystem? Are they neutral, friends, or enemies?
– What are the microtrends? Are we gaining or losing on the competition?
– What are the keywords being used to dominate our ecosystem?
– Are there any potential partners in the ecosystem we want to compete in?
– Is our target demographic well represented in our actual ecosystem?
– Do we need an offensive or defensive strategy to challenge the competition? Can we do both?
– Where does the traffic for our ecosystem come from? Is it global?
– What must we do in the short-term to compete? What about the long-term?
– Where should we be advertising?
– Can we dominate our industry ecosystem?
Welcome to ecosystem marketing.