So who won this year’s Superbowl ad-wars?
This year, at the UCLA Ahmanson-Lovelace Brain Mapping Center (don’t you love that name), Marco Iacoboni and his group used functional magnetic resonance imaging (fMRI) to measure brain responses in a group of subjects while they watched the Super Bowl ads. The way fMRI works is relatively simple: different levels of cerebral blood oxygenation have different magnetic properties. Moreover, changes in blood oxygenation correlate with changes in neural activity. Thus, without using any contrast agent, fMRI can measure how much brain areas are activated during sensory, cognitive and motor experiences. 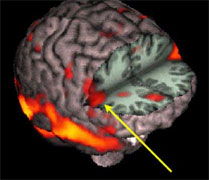 According to the brain-waves, “the overwhelming winner among the Super Bowl ads is the Disney – NFL ‘I am going to Disney’ ad. The Disney ad elicited strong responses in orbito-frontal cortex and ventral striatum, two brain regions associated with processing of rewards. Also, the Disney ad induced robust responses in mirror neuron areas, indicating identification and empathy. Further, the circuit for cognitive control, encompassing anterior cingulate cortex and dorsolateral prefrontal cortex, was highly active while watching the Disney ad. We consider all these features positive markers of brain responses to the ad. In second place, the Sierra Mist ad, activated the same brain regions but less so than the Disney ad.”
Great. Disney? Give me a break. That said, I know someone (a famous business guru) who is visiting Disney this week, so maybe the ad worked after all!
Here’s the one I picked as the winner. (Doug Smith agrees!) >>

Anyway, read all about the brain wave theory of advertising effectiveness here >>

One Reply to “Who Won the Superbowl Ad Contest? Let the Brains Decide…”