Laurence Haughton speaks softly, but his message comes through loud and clear:
Fact 1: 1/2 of all a company’s strategies and initiatives will fail to make it from the drawing board to the front lines
Fact 2: Because 2/3 of all managers follow through using tactics prone to fail
Fact 3: And only 1 out of 10 companies have the tools to address this critical breakdown
A management consultant, lecturer, and business writer, Haughton’s latest book, It’s Not What You Say… It’s What You Do – How Following Through at Every Level Can Make or Break Your Company was published by Doubleday in 2005.
In 2001 Haughton co-authored It’s Not the Big that Eat the Small… It’s the FAST that Eat the Slow– a Wall Street Journal, USA Today, and New York Times bestseller that was translated for sale in 26 countries around the world. 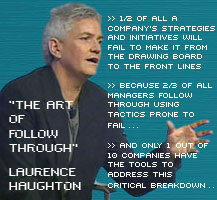 A must read for everyone from the CEO on down…

3 Replies to “Execution: Laurence Haughton on the Art of Follow-Through”